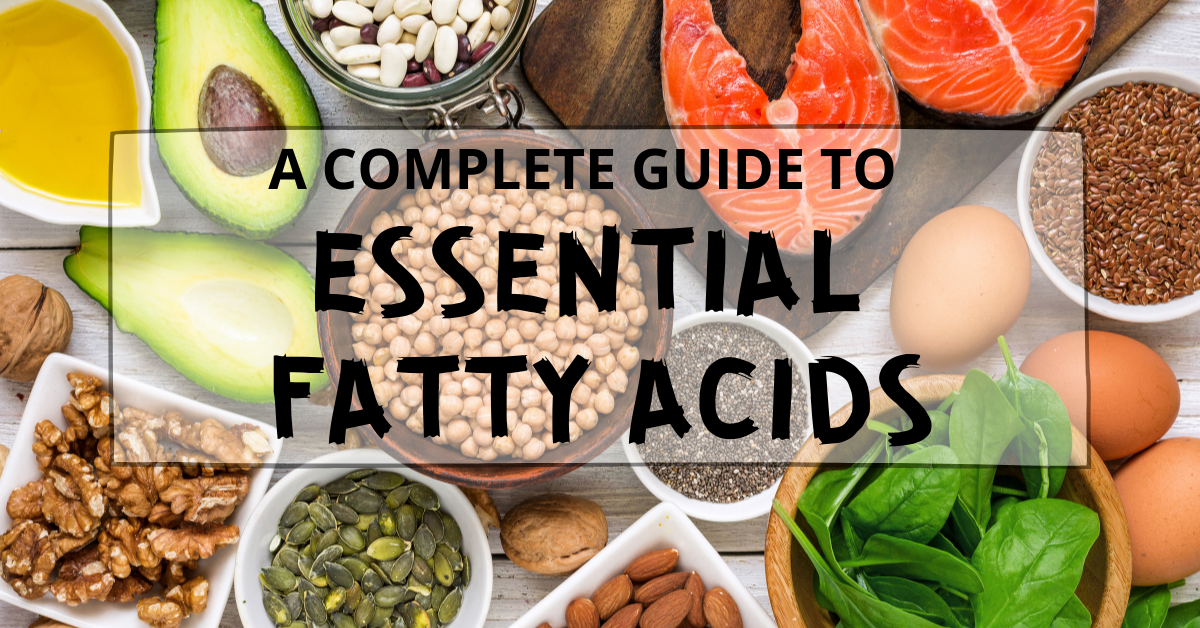 In the late 1920’s, a husband-and-wife research team stumbled upon the discovery of essential fatty acids.  Prior to this time, it was believed that fats were only needed as a source of energy and could be substituted freely with carbohydrates. However, George and Mildred Burr discovered that when certain types of fats were left out of a diet, a deficiency occurred that lead to the death of the laboratory mice they were studying.  The Burr’s discovered the first of many of these special types of fats and coined the phrase, “essential fatty acids.”

Today we classify fatty acids based on their structure as omega-3, omega-6, or omega-9 fatty acids.  And while only certain omega-3 and omega-6 fatty acids are essential (meaning they are unable to be synthesized in the body), all three types are beneficial for good health.

While rare it is possible to develop a essential fatty acid deficiency.  This may be caused by either an unbalanced diet or poor absorption of essential fatty acids by the body.  However, a more common concern in the health and nutrition community is that most people eating a western diet are not getting the optimal ratio of omega-6 to omega-3  fatty acids.  While both are essential, they support different physiological reactions in the body.  Scientists believe that a century ago the typical diet had a omega-6 to omega-3 ratio of 4:1. Today that ratio have ballooned to 16:1.  As a result of being unbalanced, it is believed that excessive inflammation can occur in the body leading to chronic diseases such as heart disease, diabetes, arthritis, and even certain types of cancer. 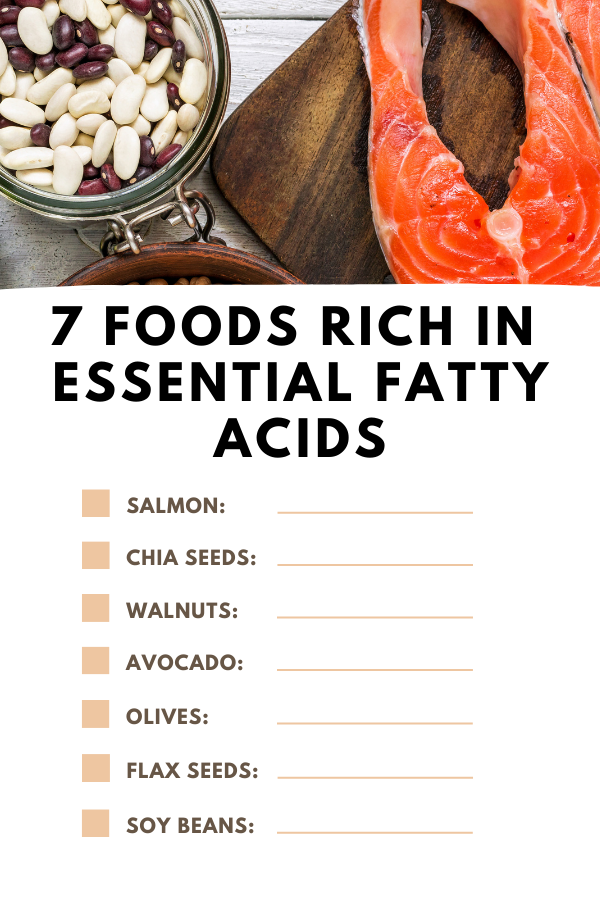 These 7 foods are rich in essential fatty acids.

Omega-3 fatty acids are a polyunsaturated fat that your body is unable to make.  As a result, it considered “essential” since you must get it from your diet.  While there are 11 different omega-3 fatty acids, the 3 most common are EPA, DHA, and ALA.  EPA, or eicosatetraenoic acid, plays an import role in reducing inflammation in the body.  DHA, or docosahexaenoic acid, contributes to the development and function of the brain.  ALA, or alpha-linolenic acid, contributes to a healthy cardiovascular, immune, and nervous systems.

In addition to helping construct cell membranes, several studies have found numerous benefits of omega-3 fatty acids.  A 2010 study linked the role of omega-3 fatty acids and inflammation.  And the Journal of Nutrition published that adults with hypertension who consumed fish oil supplements rich in DHA and EPA saw a reduction in their blood pressure.  Omega-3 fatty acids may also help lower instances of depression, Parkinson’s disease, and other neurological issues.  It is believed this is connected to the ability of omega-3 fatty acids to work as an anti-inflammatory agent.

Foods that are rich in omega-3 fatty acids include various types of fish, seeds, and nuts.  For example, a serving of salmon contains 4g of DHA and EPA.  A serving of chia seeds contains almost 5g of ALA. Because many people struggle to get enough omega-3 fatty acids through their diet, the use of omega-3 supplements are frequently used.

Omega-6 fatty acids are also essential in that they must be consumed through food.  The most common omega-6 fatty acid, linoleic acid, is frequently converted to arachidonic acid in the body.  It can be used as both an energy source and serves as an inflammatory agent in the body.  While there are several negative effects of chronic inflammation, the body needs to create an inflammatory environment to help the immune system fight off pathogens.

While nuts and seeds contain omega-6 fatty acids, most consumed source is through the consumption of soybean and corn oil.  Corn oil is frequently used in the cooking of foods.  Soybean oil is found in most processed and packaged foods as a stabilizing agent to prolong their shelf life.  The increase in the consumption of processed foods through a western diet is believed to unbalance the ratio of omega fatty acids while resulting in the proliferation of several inflammatory-induced chronic diseases.

Omega-9 fatty acids are considered to be monounsaturated because they only contain a single double bond in their structure.  Even though these fatty acids can be synthesized by the body, they are frequently consumed through diet from oils, nuts, and seeds.  Olive oil is high in omega-9 fatty acids and has been touted for its health benefits in increasing insulin sensitivity and lowering inflammation.  A 2015 article in the journal Diabetes, found that omega-9 fatty acids can lower the likelihood of insulin resistance, a precursor to type 2 diabetes.

In my classes I like to bring up several benefits of while consuming a balanced ratio of essential fatty acids is beneficial to good health. One of the easiest ways is with my reading article summarizing them combined with the review questions I’ve attached to the assignment.  This can be used as a make up assignment, enrichment article, extra credit, or as a warm up that will lead into lecture and discussion. 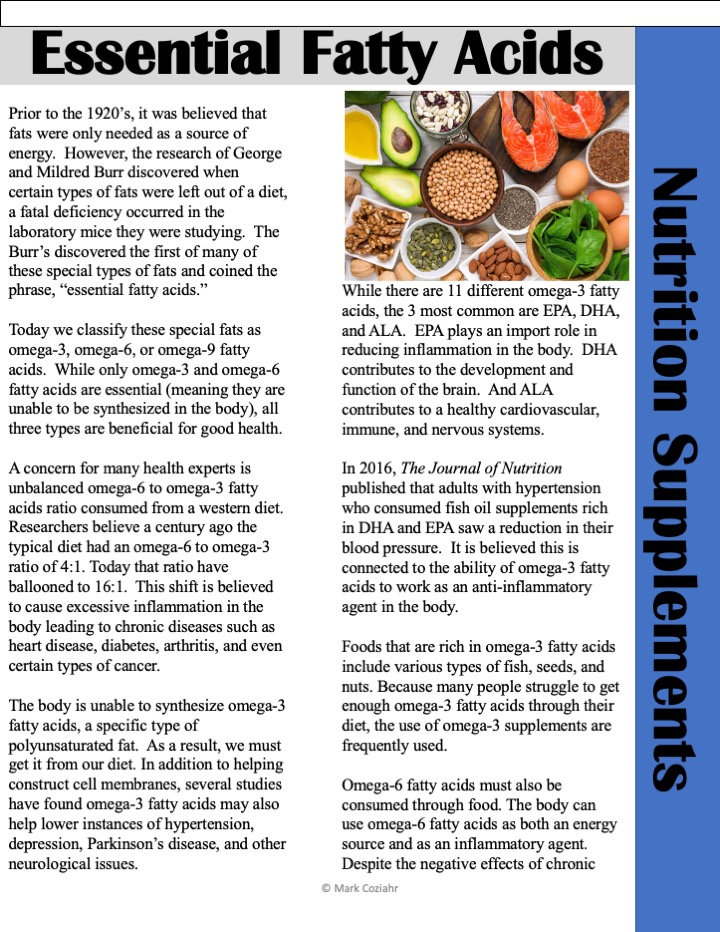